Construction of the first wind farm
for the Kingdom of Bhutan

Overview of wind turbine construction works in the Kingdom of Bhutan

Komaihaltec Inc. has been commissioned by Bhutan Power Corporation Limited ('BPC') to construct the country's first wind farm. This construction work will involve the installation of two of Komaihaltec's 300kW wind turbines in Wangdue Phodrang District in western Bhutan.
Bhutan boasts abundant water resources, and almost all of the country's power demand is dependent on hydroelectric power generation. However, the Bhutanese government is concerned that the country's water resources may be insufficient in the long term, and has therefore decided to diversify its power generation by promoting renewable sources of energy.
This construction will be implemented as a pilot project for wind-generated power, with financial support from the Asian Development Bank. The Bhutanese government aims to implement wind-generated power on the scale of 5MW by the year 2020.
The Wangdue Phodrang District is located approximately 2 to 3 hours by car from the nation's capital, Thimphu, and features the Puna Tsang Chu River, which is one of several rivers traversing Bhutan from north to south. The region is known for its strong winds, and is characterized by a powerful southerly wind that blows up-river.
For further information on wind-generated power, click here. 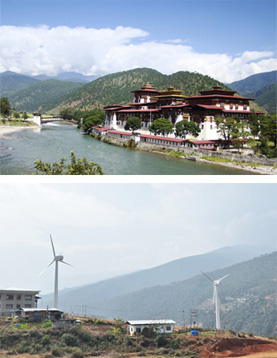